Last night at the barn, a failed photo session inadvertently captured a funny "crazy eyes" moment that's rivals former foster-dog Robin's (the poor quality of the photo shows that this is not touched-up). 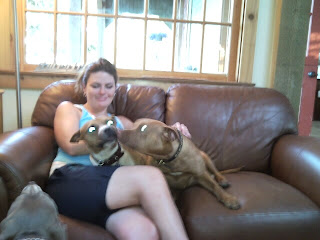 From the look on Jigg's face (he's on the left, sitting in Charity's lap) he seems to be saying, "Oh no you didn't.!! Star, on the other hand looks like she's saying, "I kissed a boy and I liked it".
Silly dogs!

What do YOU think Jiggs and Star are saying?
Posted by anita.joe at 1:34 PM