Mosey and Elliot: the rock duo that could have been

No matter how great a particular handler may be, for some pups, sometimes there’s no substituting a fellow canine. They’re just more comfortable around dogs. Hey, I get it. There are plenty of times I’m not up for hanging out with humans.

When Mosey first arrived, I thought she might have been one of those dogs. From the get-go, she loved Elliot (again, I get it) but she was pretty shy around people. It didn’t take long, however, before she let us know, “Hey, I think I'm into hanging out with you crazy two-leggers after all.”

Ahhh... I'd been hoping she'd come to that conclusion. True, Mosey’s only been around a few weeks, and is still getting her bearings, but signs point in a very promising direction.

That said, she continues her unabashed crush on Elliot. And Elliot, the natural charmer, happily takes her under his furry wing. A few photos from their morning play session, as thought-bubbled by the husky: 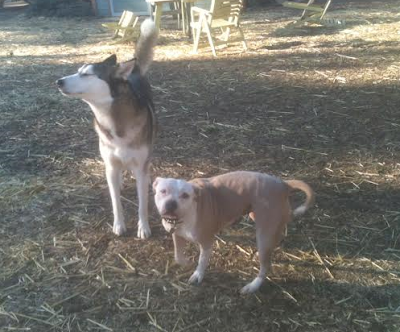 “Smell that, Mosey? What am I saying, of course you do. You’re a dog.” 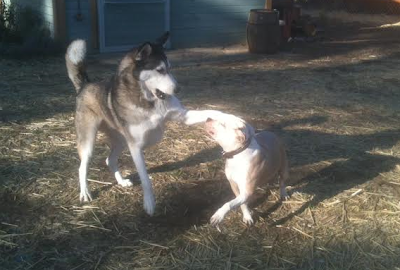 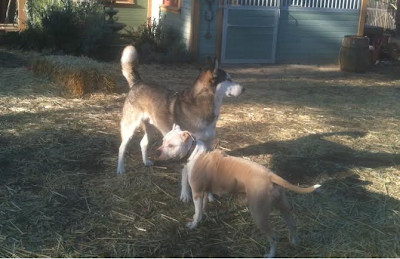 “Ok, now be serious and pose for the album cover we would have made had we been a pop rock duo in the 80s.”

Predicted: More good times ahead for those two.
Posted by Leslie at 2:57 PM