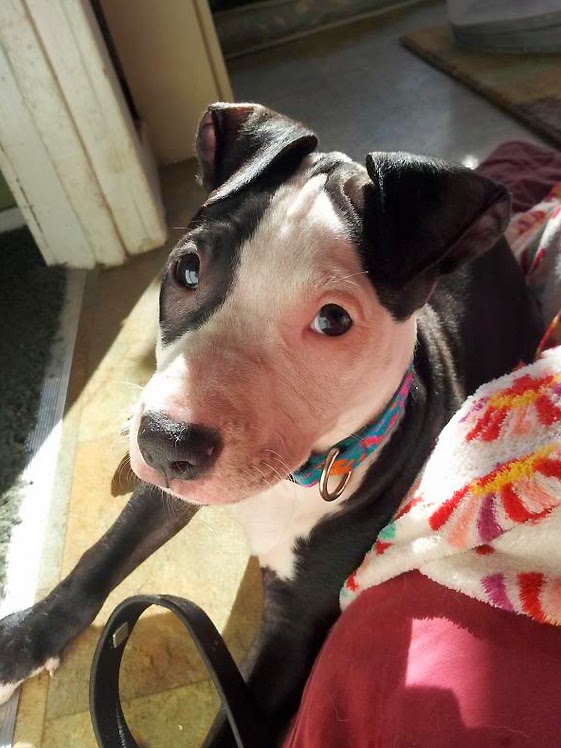 Bug's arrival into our so-called 'witness protection' program is one of the toughest recent secrets we've had to keep. There wasn't any wiggle room in this mission: Since last December, we've had to suck it up and keep her and her litter mates' stories hidden or risk blowing their chances of freedom. The deal was, her owner was facing federal dog fighting charges and dozens of his dogs were seized as part of the larger "#367 case" that first rolled out in the news in August 2013. The canine victims of this cruelty were all waiting in limbo while the defendants played the cards they were dealt: After their arrests, they could transfer ownership so their dogs could be streamlined into rescue groups and start new lives, or they could make them wait several long months in shelter kennels until they either pled guilty or their case went to trial. Evidence against the pups' owner was piled skyscraper high and the other defendants in the case were quick to enter guilty pleas, but he was said to be extra stubborn. We learned early on that it was going to be a long, long wait. "Months," was the answer we received when we accepted the secret squirrel assignment.

It's certain that the dog fighter knew - as did we - that there was a chance the case could be dismissed on a technicality and the pups would have to be returned. We tried not to think about that possibility too much.

Below: Greeting a stranger on the way home to Oakland. "Oh a puppy! Did you just adopt her?" Foster mom Katie Moyer mumbled a quick fib, one of many she'd be telling over the next few months. 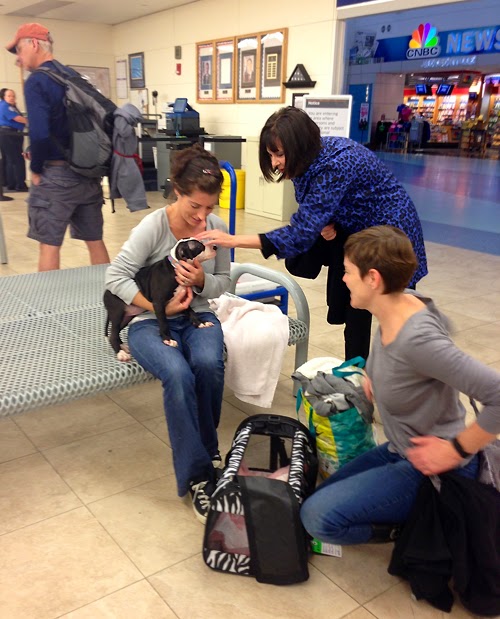 Bug, Luna, Ollie and Francy Bear were seized by authorities with their mother 'Gummy' when they were just two days old. Medical notes showed that Bug was initially listless and may not survive, but she soon found her bravado. Gummy was not able to raise the pups well and they had to be separated early on to a shelter kennel without her.

The bulk of the dogs we worked with had already been waiting four long months when we met them. Federal prosecutors worked steadily to build their cases against the thirteen men who'd been charged with abusing their dogs in three different states and numerous staged dog fights. Thankfully, Bug never experienced that world, but growing up in a loud and busy shelter can bring its own damage to young minds, so getting them into home environments meant saving their lives in a different way. How could we say no? When we flew home, we maneuvered the litter through a busy airport and slid tiny carriers filled with pee pads, chews and precious cargo under our airplane seats and on our way to new adventures. 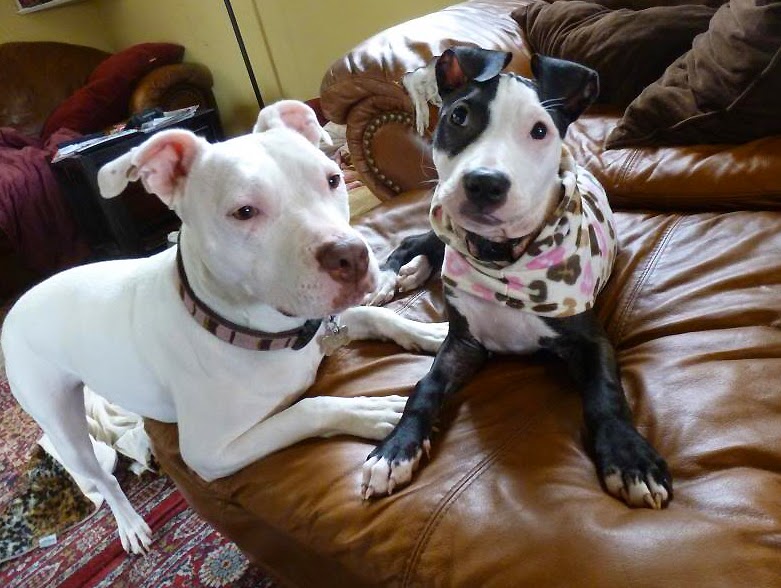 Our wonderful volunteers were under strict orders: "Do not facebook your project pups and don't tell anyone where they came from or what their story is." A tall order in the SF bay area where pit bull puppies are crack to the thousands of dog lovers who live here. The foster homes told vague stories, "They're rescue pups from BADRAP," and in the flurry of daily life, no one seemed to notice that our website and social media never made mention of them.

The first order of business when raising a puppy into a healthy dog is designing positive experiences with as many dogs, people and places as she can comfortably handle. Bug hit the lottery with two different foster homes, a bevy of dog friends, field trips and adventures. Her caretakers coached her through her shy spells, taught her good puppy manners, suffered through her car sickness phase and bravely channeled her larger than life energy level into non-stop play sessions ('zoom' means 'ZOOOOM' to Bug). She spent time at the barn for rowdy play sessions with Molly, Elliot and Eddie - and most recently, enjoys foster home life with Uncle Teddles and foster mom Cindy.

Aunt Molly gives in to the cheek grabs: 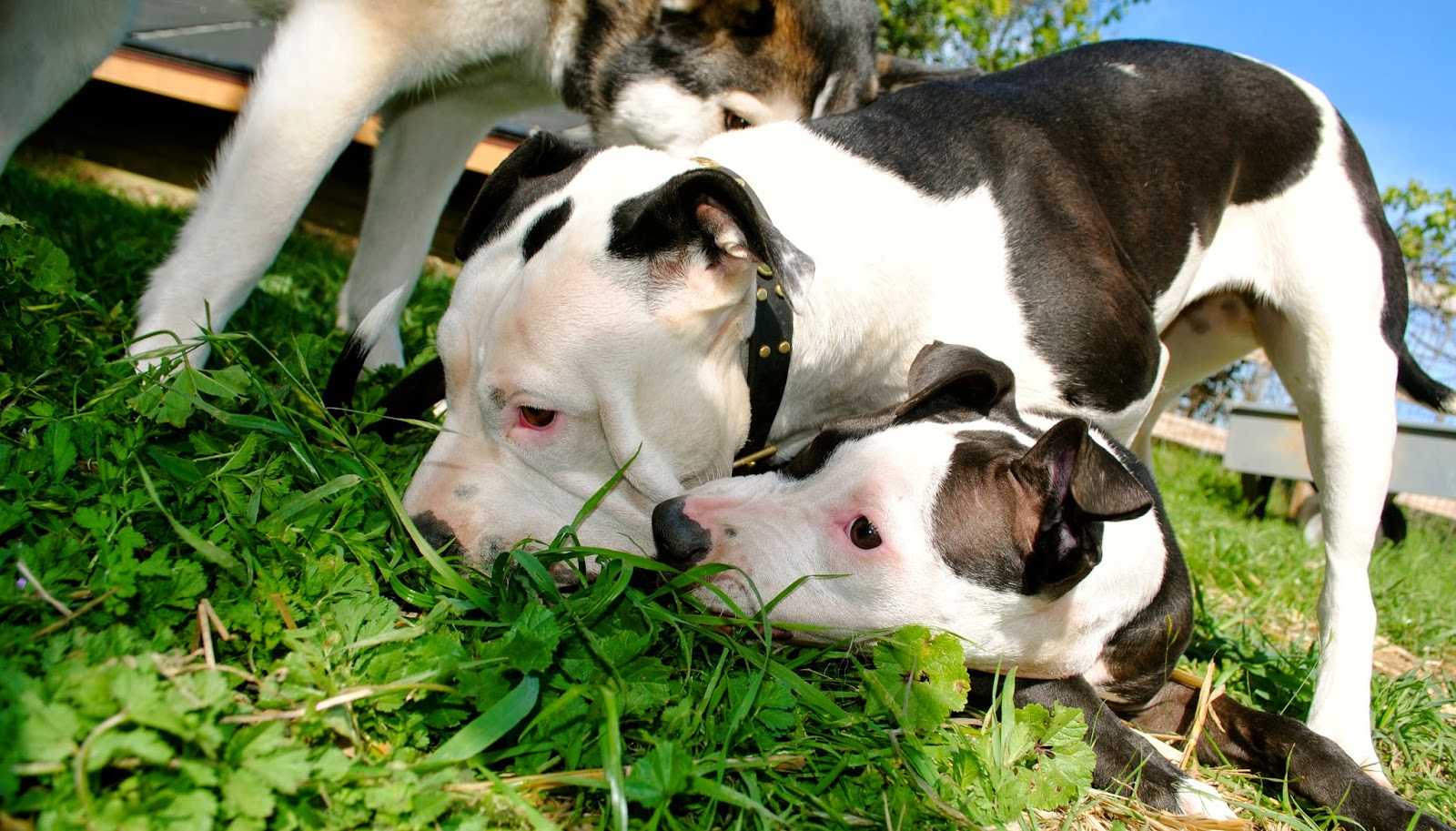 Growing up, Bug hit the "ear hat" phase back in March, three months after her arrival. We regretfully edited her gorgeous image from social media updates as the weeks ticked by. 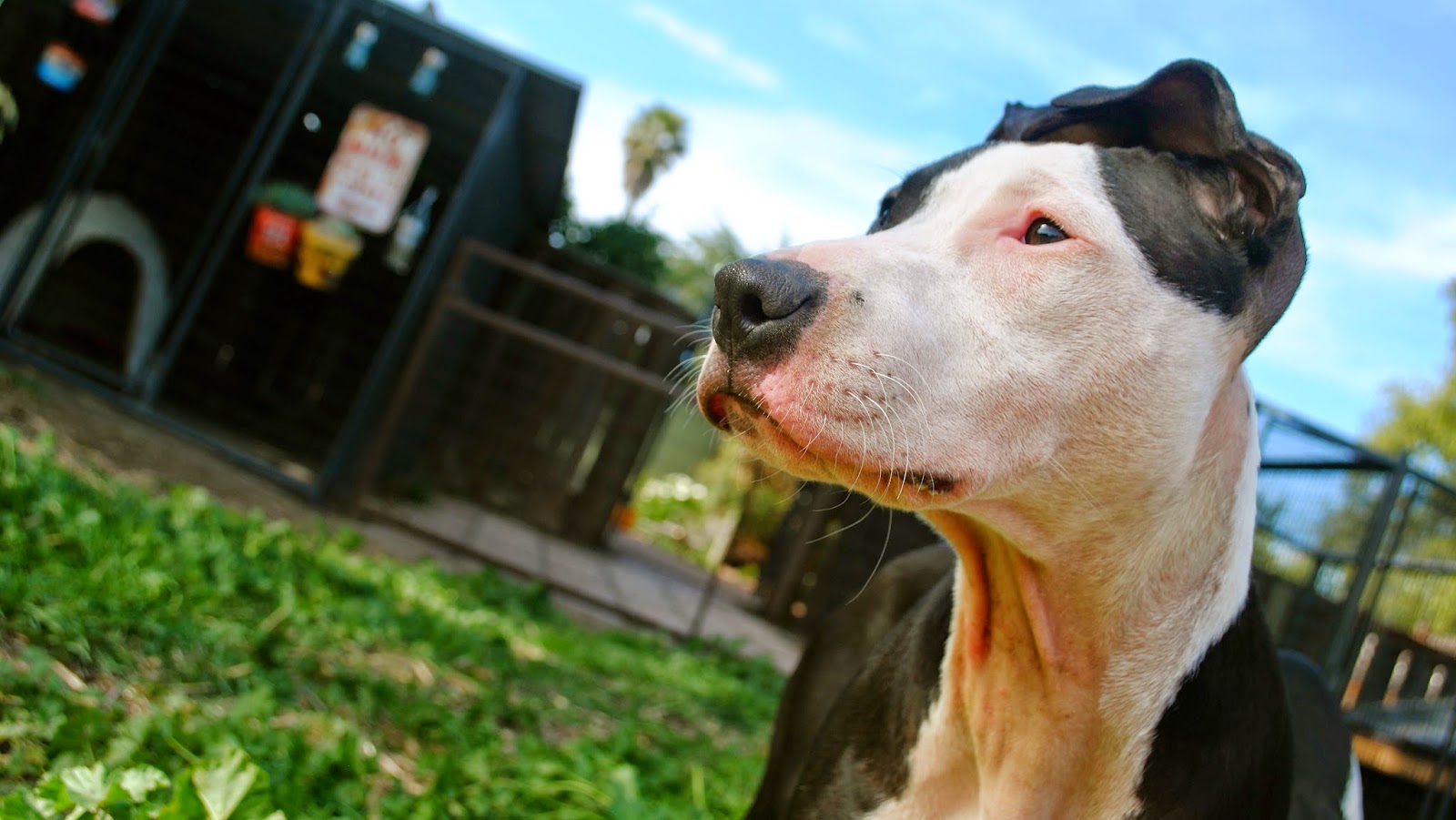 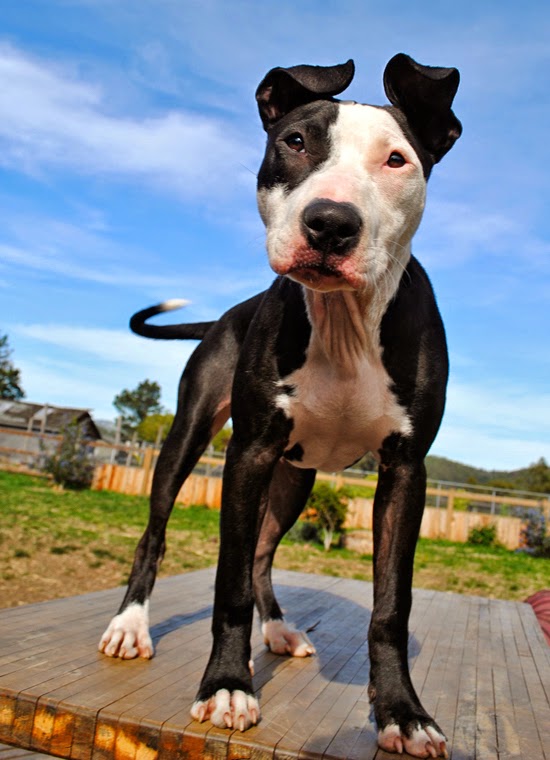 On July 23, seven months after we met Bug and her sibs and brought them home to hiding, HSUS rep Chris Schindler phoned with the news we'd all been waiting for: The pups abuser had plead guilty and they were free dogs. The abuses this group of men committed were so egregious that a federal judge delayed sentencing so prosecutors would have enough court time to submit the evidence of their crimes against the dogs. News Link. They are not set to be sentenced until October 2014.

Bug will never know about that world or about the stresses of growing up into an adult dog in a shelter kennel. We're so very indebted to our team of volunteers for making this right.

Bug is the only pup now looking for a home. She's fun, energetic, hopeful and incredibly affectionate. She's in her teenage stage now, so is full of energy and would love to live with a dog or two who can appreciate her "Life is a Party' play style. Foster mom Cindy has given her excellent leash skills, fine tuned her social skills and helped her develop calm crate time patience. We'll be rolling out more info, photos and meet-n-greet opps now that she's ... Free. 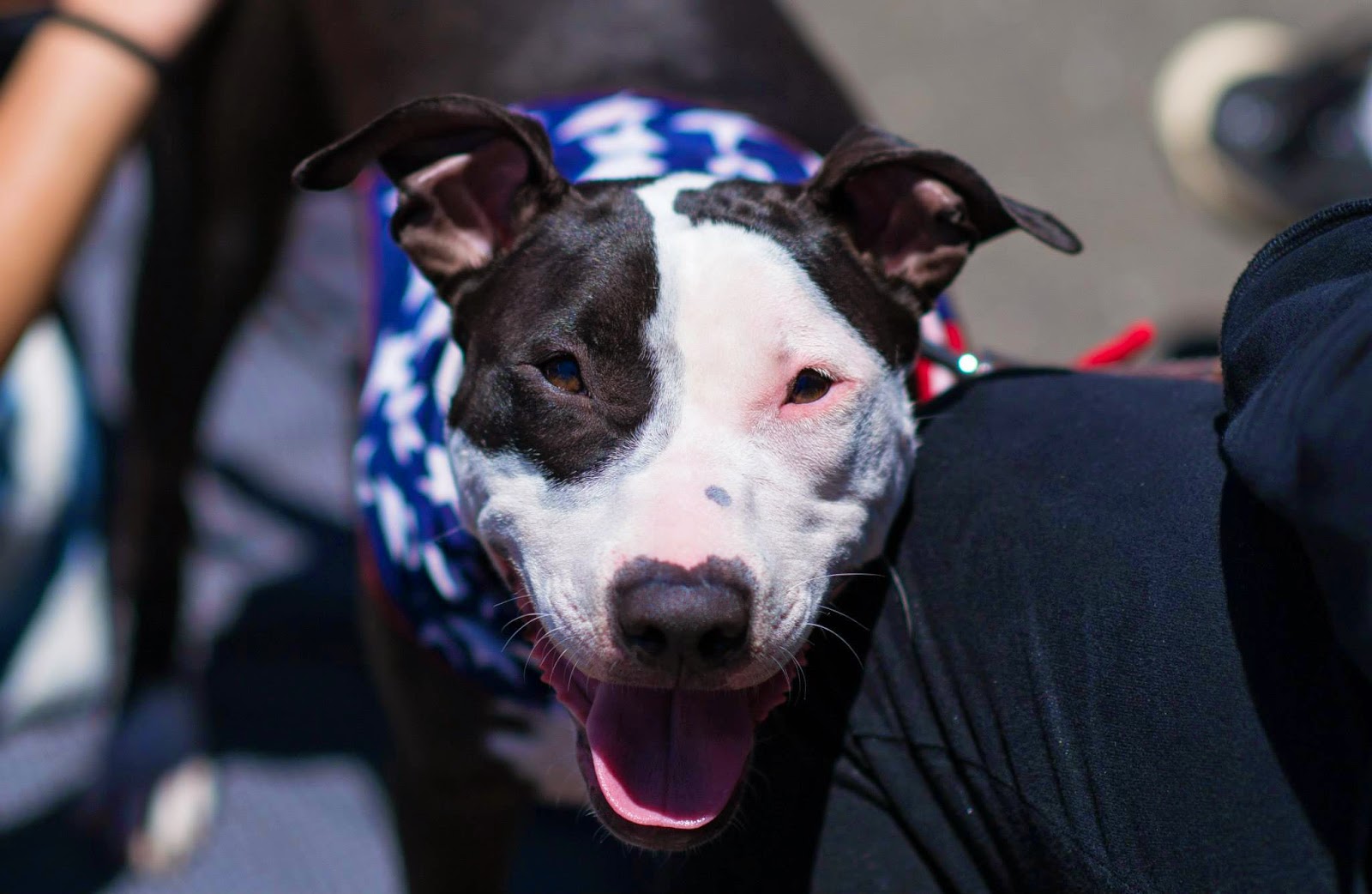 Now! Photos from a recent Open House, where Bug was "just another dog who needed a home." We sure like it that way. 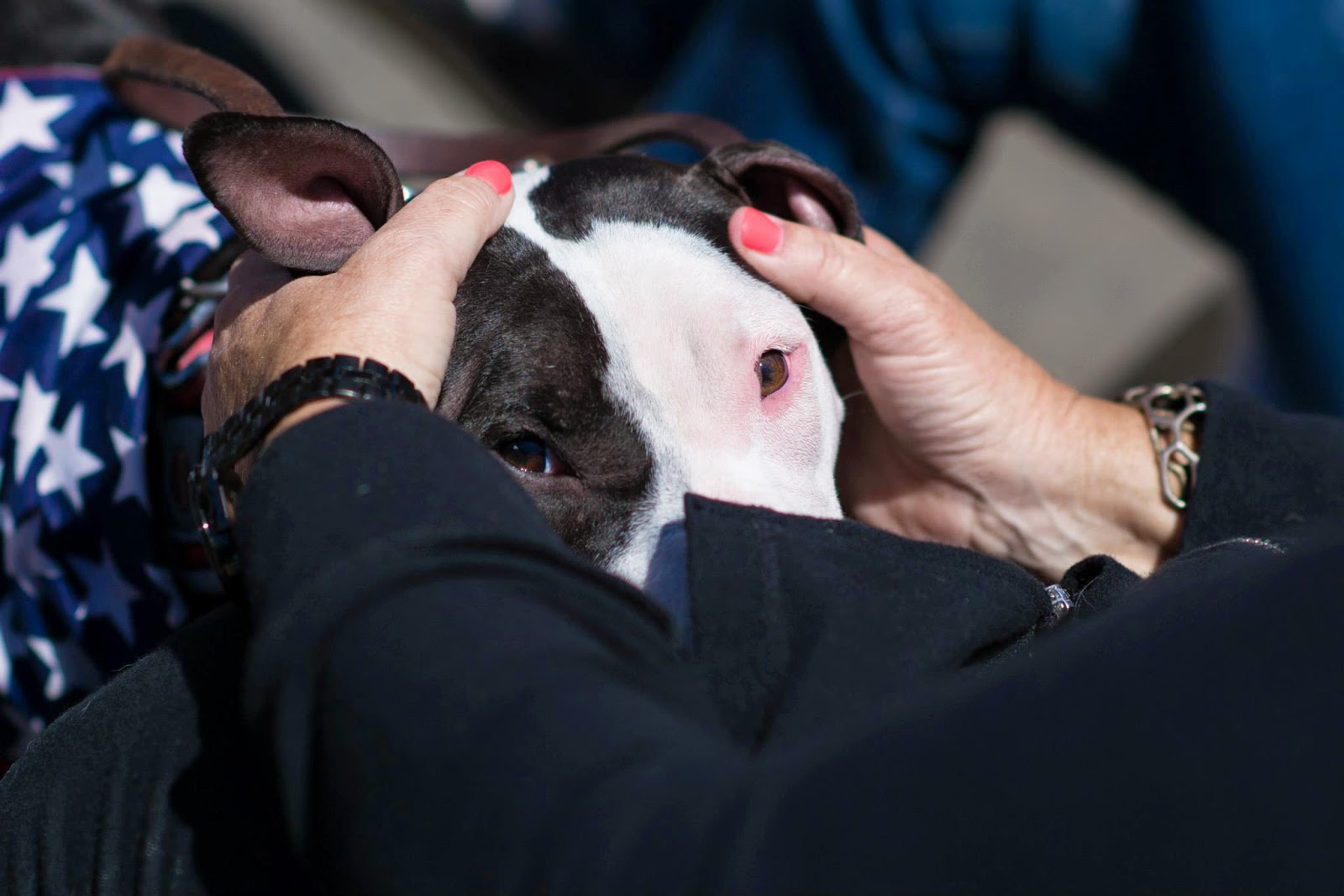 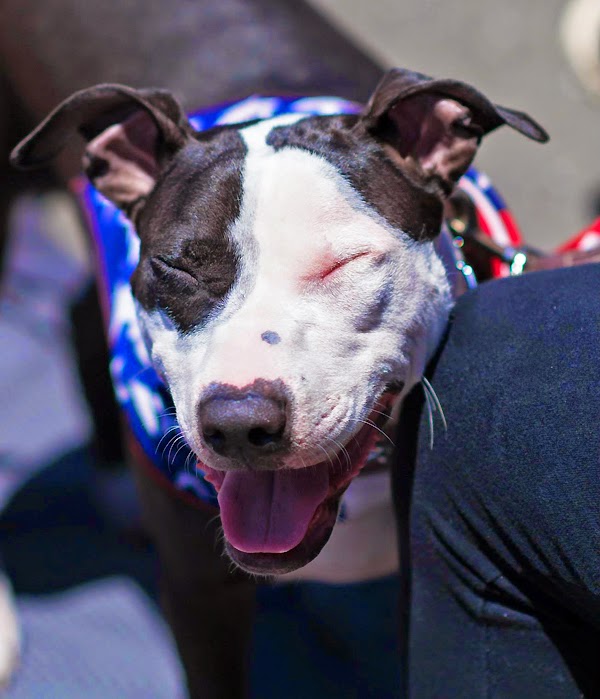 If you are interested in being part of this pups amazing adventures and are considering adoption, please contact: donna@badrap.org   Thank you!