starting to breathe -- I think

We went quiet on the Barn Blog for a spell, but are finally gulping to the surface for air. Seven compromised dogs from a longtime Texas pit bull rescuer who was forced to shut down (nearly 300 dogs confiscated) descended on our wee oasis and current crew of four at the same time that six out of town shelter staff visitors landed in Oakland for Pit Ed Camp at the same time we worked to piece together the thousand details of a spay/neuter event. Trying to breathe ... trying to breathe.

Jibboom went to live at Aunt Anita's house to give her a break from the chaos, which she appreciated very much. Willy had to stay put and complained by grumbling at the new boys in the group - their energy was just way too uncivilized. Gurdy ran in tight circles in response to the excitement. Diva sat very, very quietly and looked rather shocked. Elliot laid in a heap by the back gate - waiting for his invitation to get to work.

We didn't have the luxury of choosing the dog personalities from the group of 287. Evaluations done by others on-site were inconclusive and missed some important details, so we just sucked it up and said "Send whoever will fit in a van. (And can we please have at least two seniors?) We'll sort'em out later."

And sort we did. Some of the new dogs slept in outside kennels for a week or so while we evaled, sorted, shuffled and sorted some more - Thank goodness for the freakin' gorgeous California weather. We scrubbed kennels a hundred times, did a thousand loads of laundry, begged up bully sticks to keep the crew satiated, administered meds, puzzled over x-rays of broken dogs, negotiated their rusty manners, quelled the barking so all could rest, drank pots of coffee, ran errands in every direction and collapsed into a tired heap at the end of every day.

As gratifying as it's been helping the new kids, I won't lie. It was difficult to absorb the unscheduled task as well as the dogs' terrible backstory and I broke down in big hot tears about it all more than once. Some of the dogs have trickled out to foster care, and some still need to find foster care. Some are already on our Available Page and for some, the barn will be their final stop.

It's much calmer here now. But did I mention we still need foster homes? ;-)

I'm so grateful to Anna Rudman Santos and Anita Joe. Without their sensitive focus and long hours, this stretch would have been just plain impossible. Photo below of our oldest Texas refugee, Alma. She couldn't begin to understand why anyone would want to feel anything less than thrilled about the nation-wide response to one of the biggest pit bull rescue efforts in U.S history. Thanks for the reminders, Alma. 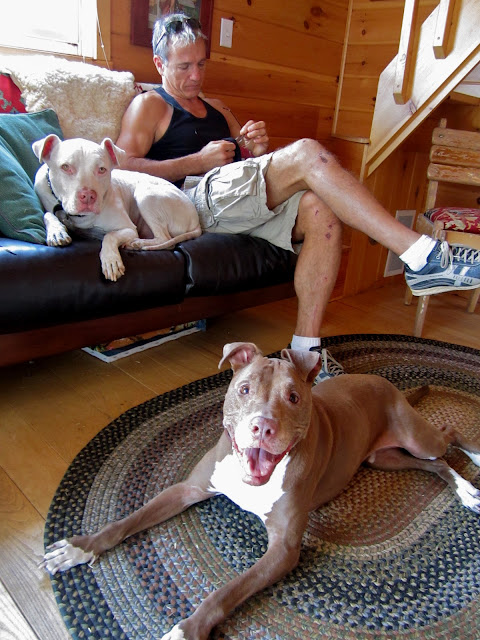