Star has left the building

Below, Star nuzzles Elliot just moments before her new foster/adopt family pulled up to take her home. These two have shared the sweetest friendship since Star first came to the barn. 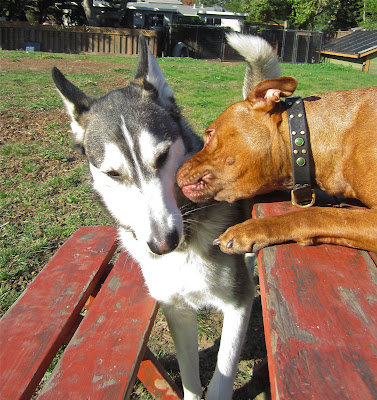 Sending this one home was a little bit nerve wracking. We all worry: "Will they like her? She's such a busy girl - Will she be good and not make a pest of herself? How long before she settles in?" I guess it's our job to worry. But Star and the Morrow family did their best to remind us that they were just fine - and four humans and one dog all drove off on Christmas Eve with some of the biggest smiles we've seen all year.

Below: A Christmas Eve sunset walk before loading her up into the car. 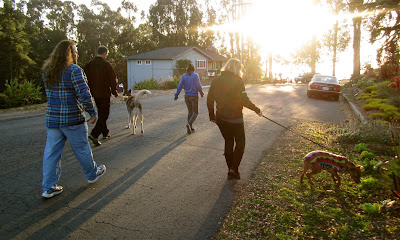 The little red head is the exact reason why we wanted to build the barn, so she'll be holding her place of honor on our blog banner. Below is a re-cap from a post in June, explaining where she came from and why we call her a trail blazer:

Star came to us after surviving a suspected dog fighting operation in Los Angeles County back in March. (News) According to Animal Services Director Marcia Mayeda, Star is the first adult dog the county has ever released to rescue from a dog fighting case. One puppy was spared and went to Karma Rescue. (Thank you, angels!) The first little history makers can thank Found Animals for championing their cause.

This news comes with heartache, unfortunately. Fourteen of the 17 dogs from this yard were destroyed at the shelters that held them, despite the fact that a large number passed behavior evals with high marks and were slated for rescue. Los Angeles County Animal Services accepted full responsibility for the deaths and blames an internal communication error for the tragedy. Director Mayeda expressed her dismay by phone and told us they're committed to making sure the same mistake isn't repeated. We're surmising that the newness of this type of rescue contributed to the error - It seems 'firsts' rarely come without some degree of confusion and struggle and strife. The Los Angeles case was a big reminder of our need to stay vigilant as the shelter world gets used to a new era with a better way of helping dogs - victims of cruelty especially.
So, Star is suddenly even more special in that she managed to escape two terrible fates. She's a darling and we're honored to be part of so many of her triumphant firsts. Welcome to real life, you little trail blazer.

During the six+ months that she was with us, Star welcomed every new barn dog with an enthusiastic tongue bath and she entertained even the most obnoxious puppies without complaint. She helped worriers like Jiggs get his bearings, gave dogs like Jondi, Spanky and Danny the best reason to do zoomies, showed our campers the fun of rile work, kept a baby squirrel safe from the other dogs, helped new volunteers learn the joy of nose work and only gave us one teeny heart attack when she snuck out of the gate to follow a small flock of turkeys down the road one summer morning. Her kennel will be filled with a new dog asap, but for now, the barn feels very, very empty without her.

Enjoy your new life, darling. You sure deserve the best. 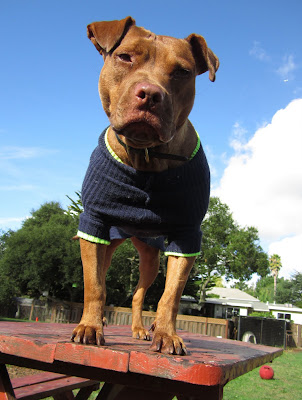