We always worry just a bit when new dogs go home until we get that one little piece of news that all is well. Like this.

Just a photo, and we exhale. Welcome home, wee one. You look mighty happy. 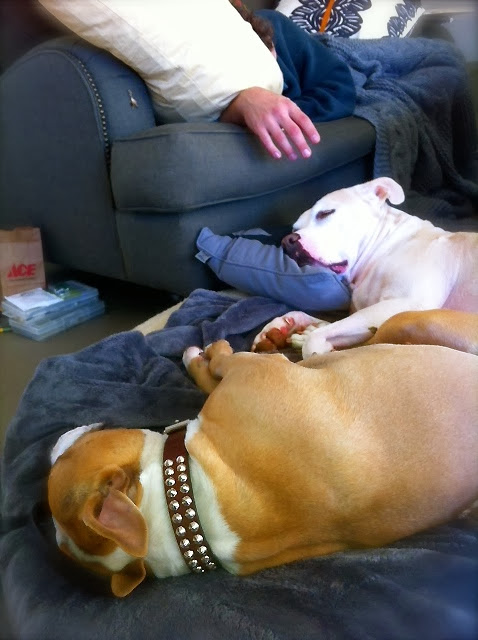 Mosey, a shy dog on the move

We met her at Hayward Animal Services. We were in shopping mode because we had several great applications in hand from folks who wanted well socialized, easy-ish dogs. Our hope was to find a good match for one or more of the apps and help everybody out. That grand plan shifted when we met Mosey.

She was trying her best to pretend she didn't exist and was so frightened that she could barely move her body. We cooed and massaged and whispered to her, but she was checked out. She stood frozen: wouldn't make eye contact or take treats or ask for a connection. We were with shelter staff from New Mexico who were participating in our 'Pit Ed Camp' workshops. We talked about the special needs of shy dogs, then left the shelter - all feeling pretty crummy. None of our applicants would want her, and she would not make it to the adoption floor, so she was a goner. 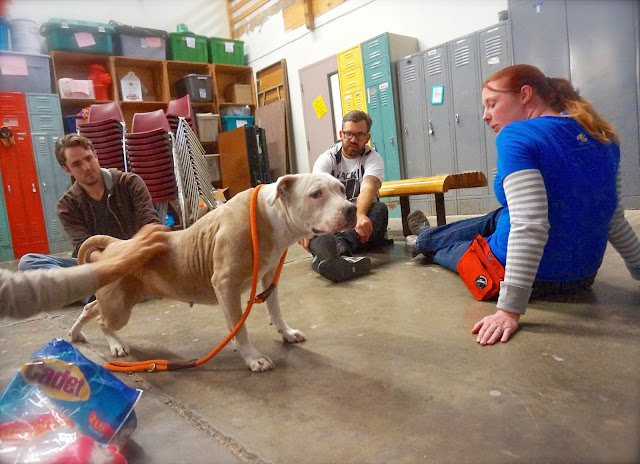 As we drove home, Tim and I looked at each other and said, "What are we doing?" We made plans to go back and get her the following Monday. 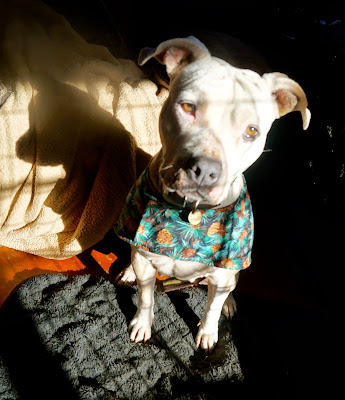 She was no less catatonic when she came home. It was as if she thought she'd stay safe if she just pretended she wasn't alive. "I don't know about this one," I said to Tim, "She's pretty far gone." In his usual we-can-do-it style, he reminded me to give her time. Even so, I warned the Barn Crew team not to get attached. I explained what a compassion case was to our newest team members and watched them roll the concept around in their minds.

In the meantime, some of our applicants went away, determined to find their easy-ish dogs somewhere else. We shrugged it off - Good applications will come again. Mosey just stared off into space - our adoption game meant nothing to her.

The one thing that Mosey perked up for was Elliot. She wouldn't move a muscle unless he was there to lure her. So every time we needed to take her outside, we shouted for Elliot. He was happy to oblige.

Eventually, she started skipping alongside him and asking to play. And then, she started lying next to Tim when he was at his computer. She was still scared of everything, but she'd found a couple of things that gave her comfort and a few happy moments to finally be alive. 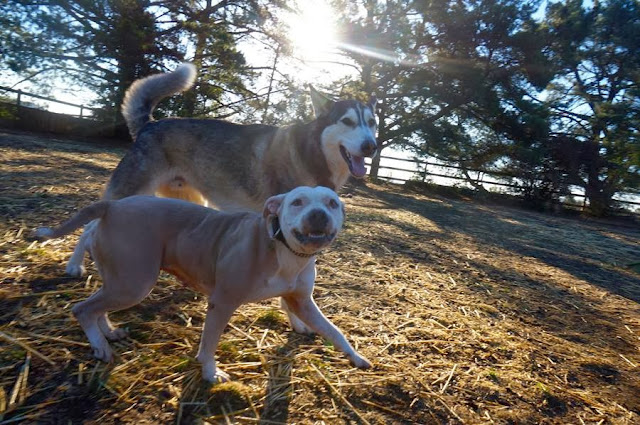 We decided to move her out of Tim's carving studio and into the barn. She was clearly thrilled to be around so many dogs but she was very shy around the team. When people came to visit, we asked them to ignore Mosey and call Beetle onto the sofa for cuddles. Within seconds, Mosey would be at their side too. Later, during her second vet visit, our vet discovered a large foxtail that had been in her ear for a very long time. It had gone deep and ruptured her ear drum. We have no idea how long she lived with that incredible pain. Our vet dug it out and put it in a plastic specimen tube for us to take home and amaze over. It's such a good reminder that troubled dogs may have fixable problems we can't see right away. 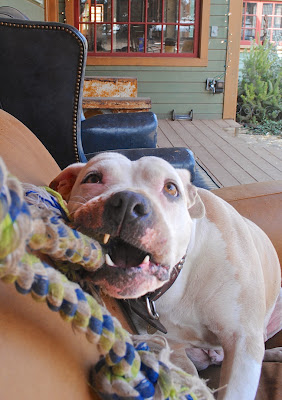 She was at her happiest when she was in the yard with dog friends. One morning when the sun was particularly warm and cheerful, and Elliot and Beetle were romping nearby, I offered Mosey a tug toy. I nearly fell over when she grabbed it and asked for a tug. "Shy dogs don't tug," I told Mosey. For a minute, Mosey told me, "But I'm not shy."

As she got comfortable, she started grumbling and barking in a very weird Ewok voice whenever anyone walked into the barn. It wasn't a warning growl. She was starting to demand attention - the sign of a dog who expects more from life. "We need to teach her another way to ask for what she wants, and then the grumbling will go away." Easier said then done. Mosey wouldn't offer a sit, so trying to capture it with a quick reward was feeling impossible. And when we lured the treat over her head, she'd follow it with huge, pleading eyes - all four feet firmly committed to standing steady. We skipped the lesson and gave her ample treats for the warm eye contact instead.

Over Thanksgiving a little miracle happened when barn crew member Anita Joe finally convinced Mosey that she'd get a treat if she sat her butt on the ground. Once the lightbulb was on, Mosey proudly offered a 'Sit' again and again and again. This was a milestone in her recovery. Finally, she had some control over here Universe. Whenever she sat, we offered a treat. Hundreds of treats. She was so proud of herself and walked much taller with this skill in her pocket. And yes, the grumbling/barking went away and was replaced by a quick 'Sit' at the kennel door and wide saucer eye contact. 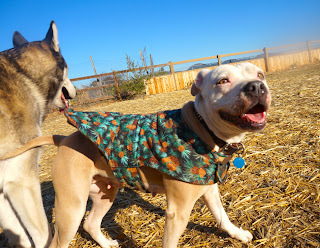 During this time, a WA-based family came by to meet our dogs. They had a gorgeous young daughter named Elliot, a senior chihuahua and a small farm filled with slaughterhouse rescues. We showed them Puddles, who would do well with so many creatures in his home. And Darla, who had lived with a cat in her past, and Elfie - who wanted to curl into their arms. They loved them all, but zoomed in on -- Mosey. "Tell me about the shy one," Shama asked. Shama had adopted a timid dog named Twyla from BR years ago, and she'd recently passed on. It made sense that she'd be attracted to Mosey. "She's just starting to come around," we told them. They left for home with a promise to mull the big decision over.

A few days later, I picked up their email while out on errands and cheered to Tim. "Mosey! They want Mosey!" They said they thought she had something special. Tim plays in a band so would be back in the bay area practicing for a big show. He made arrangements to come collect her after his work was done, and Shama stayed home, eager to welcome their new dog. Excited emails flew back and forth as we confirmed the arrangements. Photo above: Mosey's last play session with BFF Elliot, showing off that newly trademarked Mosey grin.

Photos from her departure below.

Her get-acquainted walk with new dad Tim. Frightened of traffic, we kept her on a quiet street with Elliot there as her training wheels, of course. 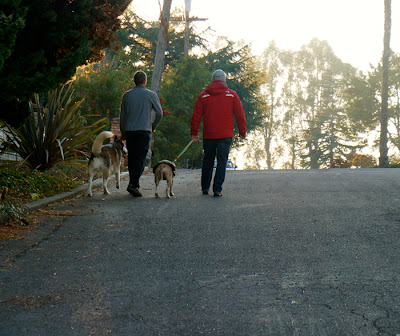 It took two human coaches, a big soft dog bed, a bag of treats and an oversized husky to help her want to investigate the car before her big road trip north. "You can do it, girl." 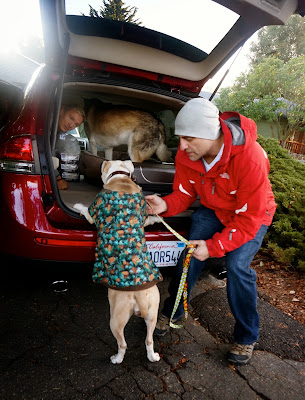 Finally, all settled in, she and new dad Tim get ready to hit the road. My camera caught her worried face, looking out to Elliot, no doubt. She'll be home and with her new chihuahua friend in no time and we all look forward to hearing about her progress as it starts to sink in that she's home.

Fare-thee-well Mosey. You are one brave girl. With many thanks to Tim and Shama for recognizing her potential and opening your hearts and home. 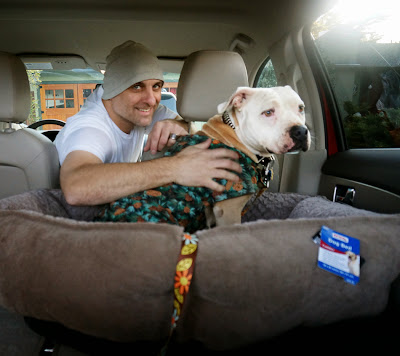 
Yeah, I have a type. I like 'em shy and needy with huge blocky heads. The squintier, more wide set the eyes, the better. Benny isn't particularly shy or needy, but he's just so handsome, I absolutely fell in love when I met him at the Barn last week. I knew this cutie already had a girlfriend -- Joon, the beautiful redhead he'd showed up with -- but I didn't feel that meant we couldn't hang out.

Sadly though, my efforts to talk to him proved fruitless. Outside of his kennel, Benny couldn't be bothered to glance my way. (What am I -- back in high school? Over here, cute boy...) The big hunk was more interested in marking, digging, and sniffing around. Boy stuff. I'd ask for a sit and he'd turn around and bark.


This week, it was a whole different story (again, eerily high-school like). Not sure whether it was the focused one-on-one time that had happened over the past few days or the fact that he was now neutered (probably both), but Benny was listening and heeding cues like we'd been dancing together all our lives. Ok, I exaggerate a little, but holy cow, what a difference -- and what a testament to the folks who'd worked with him all week -- a little training makes. "Sit," "down," "leave it" -- no problem.

So now Benny and I weren't just talking, we were communicating. And the best part was that every so often, instead of rewarding him with a treat, I scratched his cheeks and kissed his head. And Benny, that big lug, nuzzled in for more. A week ago, I would've said this guy is never gonna be one of those dogs who's into affection.

A shameless plug for the calendars that highlight some of our favorite barn dogs from 2013. Diamond dug her paws in deep to our hearts so was a natural for the cover glam. 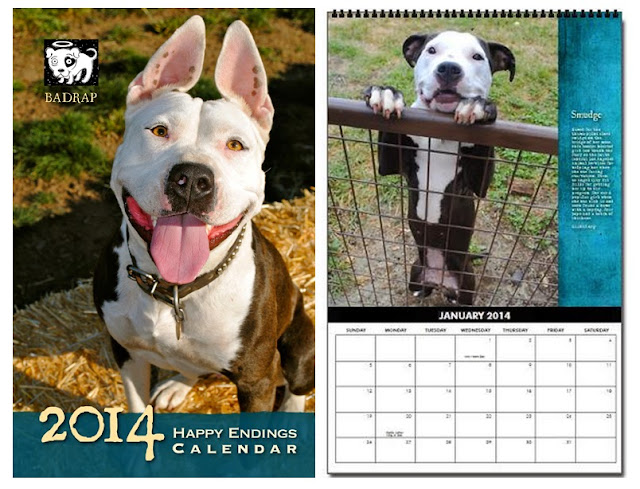 And this year, with so many photos of Elliot at the barn falling out of our photo files, it washigh time for a tribute to his work with the barn dogs.

It was a very good year, with some of the fastest adoption turn around we've seen since starting this work. We're not sure when the dogs crossed the tipping point from misunderstood misfits to highly sought after cyber-celebs, but times have changed for the better and we're all loving it!

Thanks so much for your kind support as we march these pups into a brighter future. 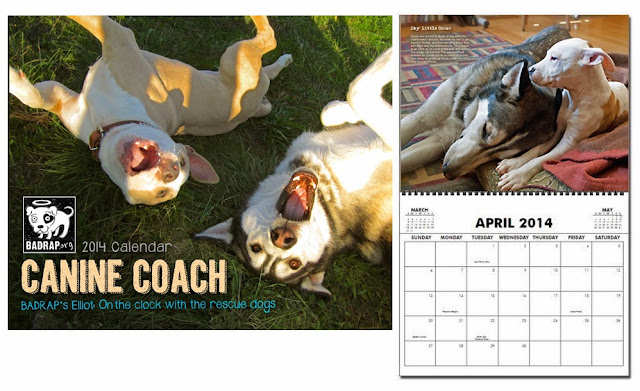