This is Jondi with her 'first person,' in their favorite red chair. They used to spend a lot of time here.

A lot has changed since this photo was taken. Jondi's person had bigger plans and saw fit to exit the planet early last summer, and another wonderful person stepped in to make the red vixen part of her family.

We went to visit Jondi's old chair yesterday at her first person's house. I plopped down in it, and thought about the old days. For a minute, it felt really strange ...The past colliding with the present and sliding into the future - all in one mini tsunami in my stomach. I'm sure you must know the feeling. 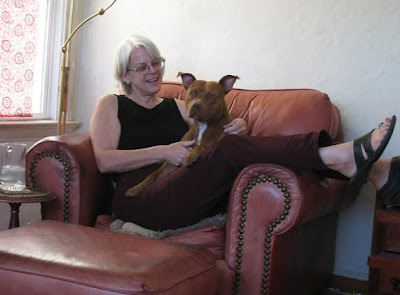 But - Jondi's in her new home and it was time to give the first chair a new home, too. So we loaded it up into our little red pick up truck and chugged up the hill to the barn. I woke up with a sense of urgency today and poked Tim awake: "Wake up. We have to put the chair in the barn now." It was sitting out in the pick up truck looking ... lost. Poor Tim - The things I make him do.

He pulled on his clothes and plodded out to the truck with me. I'd been up early, sweeping and mopping in preparation for its homecoming. We heaved it out of the truck and navigated gates and barn doors. Every dog on the site cocked his head and watched the procession from whatever vantage point he could get.

And there it is. Olive is its first inhabitant and hopefully there will be many more before it finally gets nibbled away by one or more party dogs. Jondi's at home and so is her chair and so is her first person, and everything's where it's supposed to be.