geeking out on an Oakland original 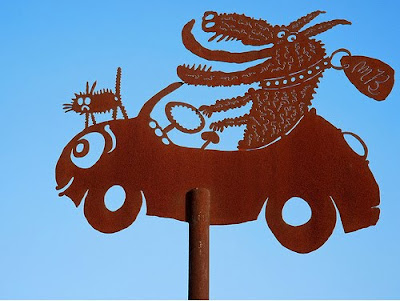 If you live in the SF bay area, you probably know about the work of Mark Bulwinkle. He's been an Oakland fixture forever and has graced our fine, grungy city with some of the wackiest, wildest, most original works ever. We've been crazy for it since first spotting it at the parking lot of Home Depot in Emeryville, of all places. Twenty or so of his works (right) jet up from the ground and call out to the wildman in all of us.

How do you describe his work? This article from Architects and Artisans probably says it best: 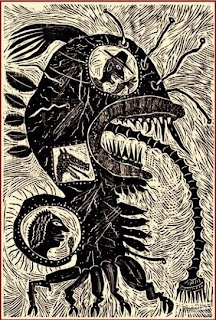 At first glance, the artistic milieu of Mark Bulwinkle appears to be a happy one. Animals cavort, flowers bloom, the sun shines, and a boy’s eyes take the form of hearts. The cartoon-like images seem to be laughing at the viewer, as though a private joke has been incised into each.

Upon closer inspection though, an energy with manic overtones emerges. We notice that a cat is blind, a dog appears rabid, a grin seems more like a grimace, and a trio of menacing beasts swallow each other whole.

He so speaks our language.

For pit bull rescuers especially, life can seem rough and rusty, but it's much easier to swallow when peppered with the right amount of sarcasm. Lose that and slip into fairytale happy land, and pretty soon you'll probably lose your mind along with your sense of humor.

Bulwinkle shirked an invitation to appear on the Oprah Show some time back. He said he wanted “to be an artist, not a celebrity.” Well he's a celebrity to us, so hopefully we didn't show our geekdom too much when we met him at his studio to talk about art. His place is wall to wall crazy - Every inch covered in wackydom. 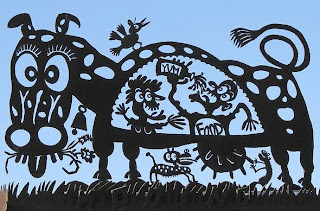 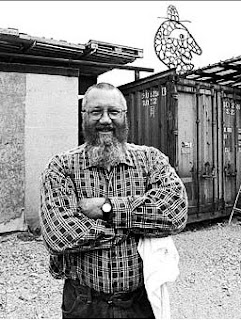 We knew we had to find a way to include his work into the barn, and thanks to a Christmas gift from my boytoy Tim, we have! If you happen to visit us someday - and we hope you do - you'll be greeted by a Bulwinkle original at the front door, and Bulwinkle tiles set into the hearth of the woodstove. If you're like me, you might squeal like a twelve year old. We won't mind a bit if you do.

Right: Photo of Bulwinkle at his studio, credit Richard Whittaker.

I'm thinking he held back a bit on the sardonic edge that shows up in so much of his work. At least, the dog's not devouring anything and we don't see a swinging pair of hairy balls flying high behind him. Such restraint deserves to be commended, although it must've been an exercise for this arteest. We love it and smile at it every day. "Hello Crazy Dog. There's a little bit of you in me." 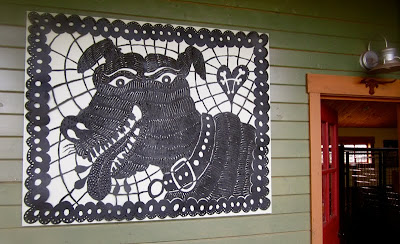 (Double clink the photos to size them up a bit.) 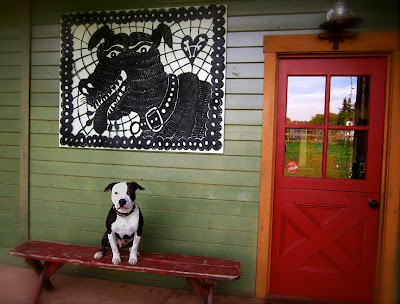