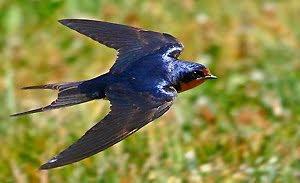 Where is this place?
We get that question a lot when visitors phone on their way up to the barn, many of 'em thinking they must be lost. It's too rural to be Oakland, right? We ride between two worlds up here in the hills: The barn is sandwiched between the sad-lands of East Oakland and the incredible open space of the east bay green belt. Yes, it's still Oakland!

Now that our noisy construction phase is done, the wild things have been peeking in and finally making themselves at home. The barn swallows (left) were here almost immediately - spinning figure eights in and around us while we kick up free food flies for them during doggy doo pick up. We kept the eaves open so they could build their lovely mud nests. The house sparrows have been happy about the new real estate, too. (below) 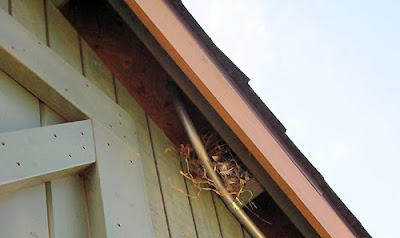 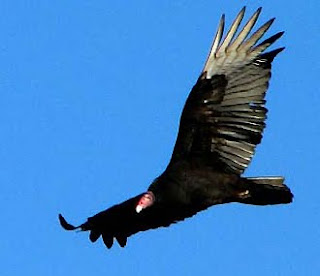 Because we're situated on a ridge facing open space, we get buzzed nearly every morning by our favorite resident turkey vultures as they take their first flight of the day. We just love these naked faced clowns.

They tip and tilt just over our heads as they feel their way towards the nearest thermal updraft. We always know when the doggy poo pail is getting a little too full because they linger longer in our air space - gawking down at us, inhaling the fragrance when it's time to empty. Mmmm. Stinky smells! 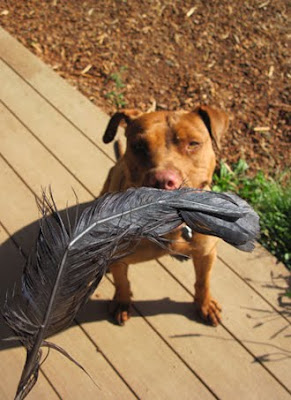 Ravens like this place, too. I think they're entertained by the dogs' rowdy play sessions. An established pair makes regular morning visits here. They jump from tree to tree and seem to comment on everything the dogs are doing, sometimes breaking into that classic gravely raven laughter: "Cr-r-ruck! Cr-r-ruck! Cr-r-ruck!"

Star seems to have a special raven admirer. She's had shiny black flight feathers appear in her path more than once. Pure coincidence probably - but they always end up with her and no other dogs. She carries them around like little trophies until it's time to hold them between her front paws and rake them through her teeth. Maybe she counted ravens as her friends back when she was chained out in the desert yard in her former life.

Early morning brings squabbling turkeys too, who march like little soldiers along the back fence - probably still pissed about being blocked from the yard by this new-ish barrier. This space used to be major turkey stomping grounds until the pit bulls came to town. A raspy rooster two doors down joins them in their sunrise noise making. The ultimate alarm clock. Deer move through too, of course. Even more exciting, the deer were tracked by a twice-spotted mountain lion this past winter, which put a big damper on our evening hikes with the dogs. 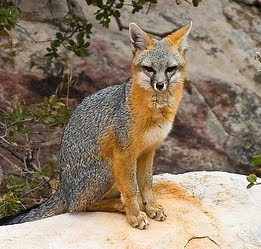 The dogs are serenaded by creatures at night, too. Barn owls and great horned owls call from the outskirts, and grey foxes and coyotes take turns howling and yipping just over the hill from the barn.

I thought the howling might cause barking, but the dogs seem just fine with the eerie late night opera. I suppose they hear the songs for what they are; an "all is right with the world" message from their wild cousins. We hope they agree.
Posted by Donna at 1:53 PM