Powered by Funk - A milestone intro 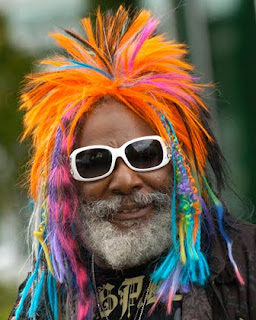 Because these four-legged radio receivers we call dogs are aces at picking up on our vibes, it's always best to wait and do dog/dog intros when you're in a happy, casually confident mood - especially when one or both dogs have had issues with dogs in the past. So after a night pounding the dance floor under the spell of Parliament and King of Funk George Clinton, we decided our brains were locked into a good enough place to finally do an off-leash session with Jondi and Jiggs.

Jondi's had a history of bad dog funk in her former home(s) so we've been working to reprogram her little mind, and have been coasting into this moment at a snail slow pace. She's been kenneled next to dogs for about six weeks of close proximity 'flooding' and lavished with positives for any kind of calm, appropriate behavior towards her barn mates. Also, the team's been doing a lot of obedience training to help her learn to follow our lead and our verbal prompts.

Finally - today. First a walk with both dogs to check body language, then some major praise for casual butt sniffing along the way, then back to the yard to do some full contact. Powered by Atomic Dog in our heads, we dropped Jondi's leash. Then, we dropped Jigg's leash. Woo hooooo!

The P-Funk Mothership that landed in Oakland this week didn't let us down, and the good vibes it broadcast seeped all the way up to our little barn. The moment was as smooth as we could hope. Granted, Jondi didn't actually say "I like you" to Jiggs. It was more of a "You're cool little man. Just don't bug me or I might nail you" moment. Fine. We'll take it.

Thankfully, Jiggs is low enough on the totem pole to respect Jondi's self-proclaimed Queendom, so we expect they'll build up to some fun and slowly (emphasis: slowly) work out some impressive dance moves together. More info here on the beauty of snail slow intros. For now: YAY! 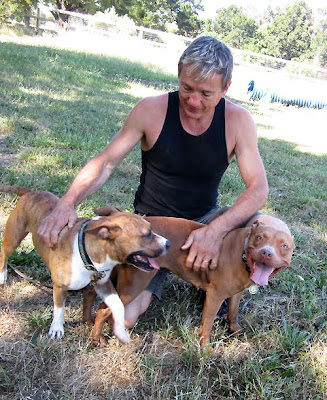 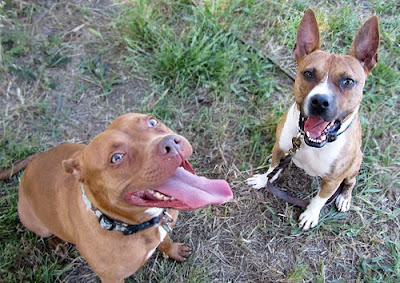 Atomic thanks to George Clinton and Parliament for bringing funk to our world, way back then and right here today when we needed it most.
Posted by Donna at 12:17 PM